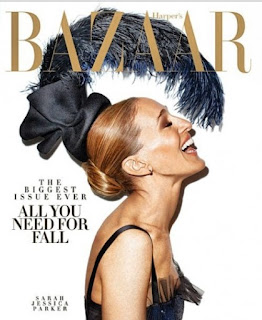 Harper’s Bazaar  just gave us our thrill of the year : the cover.  Sarah Jessica Parker is wearing an Ellen Christine Couture headpiece on their cover, and it looks glorious. Naysayers may mock, may dissent, may critique.  But there are thousands, millions wearing hats once again.  Given the Royal Wedding feeding frenzy, celebrities are not as timid about donning a hat or a headpiece from time to time.  Sarah Jessica Parker was seen at the Metropolitan Museum Gala wearing a Phillip Treacy headpiece, as she is wont to do.  Either our dear Stephen ( Jones) or Mr. Treacy is the choice for high profile hat handlers, much because of the English influence on the world of millinery. Those of you in the business know Ellen Christine, and we proudly join the ranks of editorialized touted hat makers the world over.
Now that the feather is out of the bag, and Ms. Parker can be seen with that magnificent masthead spread across our plumage, does the world sit up and take notice?  Yes, in a way.  But WWD, that bastion of daily fashion waves and trends seems to be put out by the Harper’s Bazaar cover.  Thank you, WWD, for covering Ellen Christine over the years, but give hats a break, please. Not fair for you to take a one sided view , and that one side being anti-hat.  At any rate, it’s a headpiece, for heaven’s sake, and what of it? I take umbrage at your point of view, and my client/friend base has been as miffed as I am.  Please allow me to take a quote from Mrs. Ann Albrizio, the Doyenne of  the Millinery Department at FIT  who said in one of her press releases :

“ Women’s Wear Daily” has been calling the total look a suit complete with the wearing of a hat.  Also known as the “Snob Set”, it has become a status symbol in the fashion field today.”

We don’t have a date on this press release, but as Mrs. Albrizio was the driving force in millinery during the 1960’s through the 1990’s, pick a date.  No need to dissect the quote, but if you liked hats once upon a time, what happened?  How did you fall out of love with us, the hard-working milliners of American fashion?


I won’t belabour the line you poached from a Steven Sondheim song to end your article  I won’t slash your tires.  But I will stand as a strong supporter for the only accessory that can “top it off”: the hat.  Many accessories can compliment an ensemble, but none but the hat can end the sentence.

In every way, Ellen is right. My grandmother was a social doyenne in Washington; she loved hats. My mother lived at the UN Plaza; she loved hats. Their sense of style and propriety encouraged my love of hats. Thanks to true artisan craft work from the milliners, there is no shortage of fabulous choices. Find the hat that's right and get under it.

Congrats with being on the cover of Harpers Bazaar! A dream right?